Claims in life insurance are the most important litmus test for an insurer, because it’s important that your dependants don’t get harassed at the time of making a claim, as that would defeat the whole purpose of buying life insurance. There are two ways in which you can ensure that such a situation doesn’t arise—be meticulous when buying insurance, and keep a track of your insurer’s claim record.

The data on claims is available in Irdai’s annual report, but there are layers to the information shared, and which you need to understand. Mint brings to you the latest report card on claims of life insurance companies and takes you through reading these numbers.

Irdai reports claims settlement for retail policies in terms of the number of policies settled and the amount of benefit or sum assured settled. We have looked at the number of policies settled and have calculated claims settlement as a percentage of the overall number of claims— claims booked plus claims outstanding at the start of the year. Naturally, a company that has a high percentage of claims paid bodes well for the policyholder.

There are 24 life insurers in India, of which half settled at least 90% of their claims. “There is more awareness on claims processes among claimants. Also, a good grievance redressal mechanism has contributed to claims settlement. Public disclosure on claims information and a wider recognition that timely claim settlement is the most important moment of truth for customers are some of the factors that have improved the claims settlement for insurers,” said Amitabh Chaudhry, managing director and chief executive officer, HDFC Standard Life Insurance Co. Ltd. “As the industry grows, it is natural that more and more focus would be on claims processing and payments,” he added.

But is 90% an impressive track record? “Ideally, the claims paid ratio calculated based on the number of policies should be over 95%. In the developed markets, that’s the norm,” said Kapil Mehta, managing director, SecureNow Insurance Broker Pvt. Ltd. While in terms of the number of policies settled, the industry is closer to the international norm, it’s far behind at claims settlement in terms of the total sum assured payout. 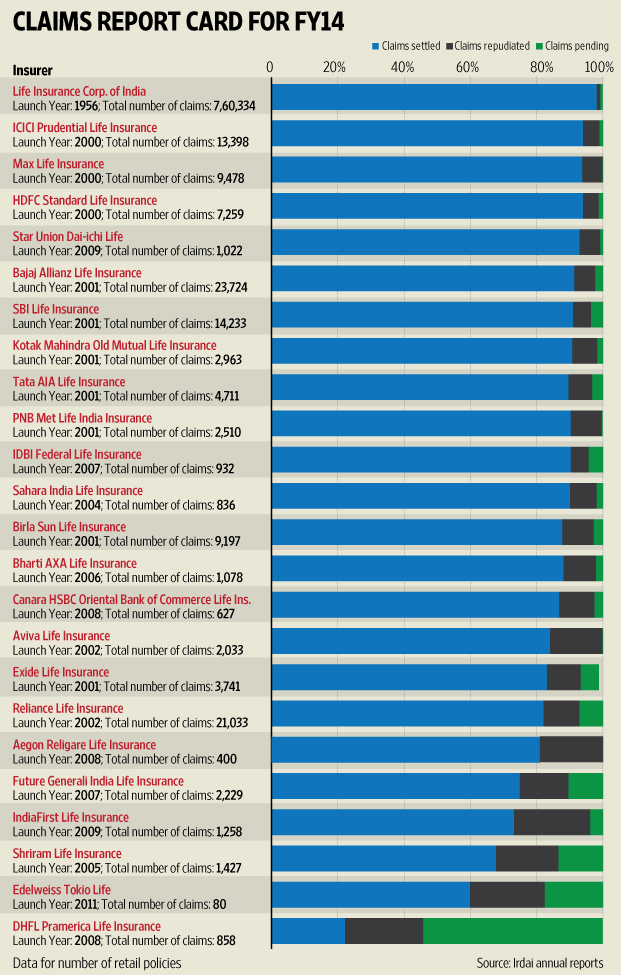 For the private sector, the percentage of claims settlement in terms of the sum assured was 78.13% in FY14, while for LIC it was 95.17%. This means that if the insurer got claims of a total sum assured or death benefit amount of Rs.100 coming from various policies, it settled only Rs.78.13 of the sum assured. “For sum assured, the claims settlement ratio should at least be 90%,” said Mehta. “This ratio will always be a little lower because typically it’s the high sum assured policies, such as term plans, that are investigated thoroughly and repudiated. Traditional plans have the lowest repudiation as the insurance element is tiny, followed by Ulips (unit-linked insurance plans),” said Mehta.

Many others agree with this. “The industry is seeing higher percentage of claims under protection products because these have gained popularity and form a good percentage of the business written. Since such policies have gained popularity in the recent past, every claim we receive in this area is an early claim. As we progress, we will see more of non-early claims, which do not require investigation and would be settled quickly. So, the ratio will change and be similar to the number of claims,” said Chaudhry. Early claims are typically those claimed in the first two years of buying the policy.

Aegon Religare Life Insurance Co. Ltd, which was at the bottom of the pile in FY13 and in the three years before that, settled 81% of the claims in FY14. According to the insurer, this was largely due to the fact that it was able to check fraudulent practices through better customer on-boarding processes.

Insurance companies bet on you living longer. So, claims filed early, typically within two years of buying the policy, are investigated thoroughly to rule out fraud and non-disclosure of facts that could have made you a high-risk candidate for the insurer. Due to this, typically, younger insurance companies have a lower claims settlement ratio as they have a higher percentage of early claims. “There are more chances of fraud, syndicated customer misrepresentation and medical non-disclosures in early claims,” said Munish Sharda, managing director and chief executive officer, Future Generali Life Insurance Co. Ltd. The insurer settled 75% of the claims in FY14. “Of the total claims denied, 94% are early claims, and the reason of repudiation is mostly medical non-disclosures or misrepresentation. The non-early claim settlement ratio has been stable at 98% in FY15; it was 99% in FY14,” he added.

Next in line is IndiaFirst Life Insurance Co. Ltd, which settled 73% of the total number of claims. According to the insurer, the repudiation is primarily on early claims and its non-early claims settlement is 99%. 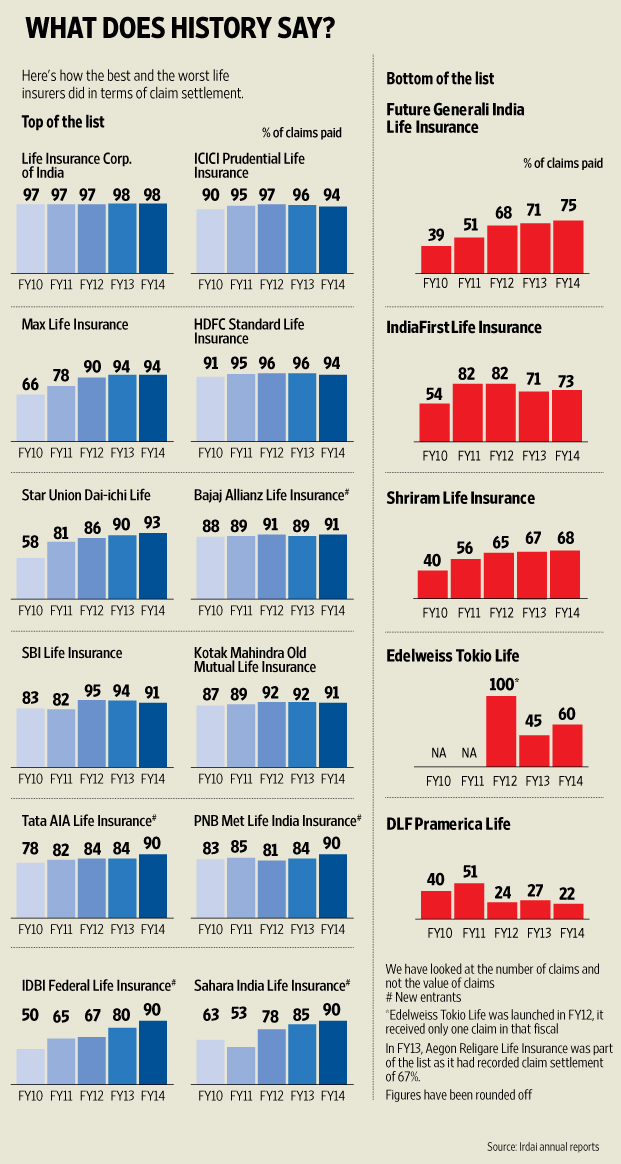 Shriram Life Insurance Co. Ltd, on the other hand, settled only 68% of the claims because, according to the insurer, it caters to entry level customers. “We have comparatively higher claim repudiation on the individual side, but if we look at group business where Shriram Life has 85% of its exposure on lives covered, the claims payout is 100%. On the individual side the repudiation is largely on account of fraud or misrepresentation as we cater to entry level customers and have relaxed underwriting,” said Manoj Jain, chief executive officer, Shriram Life Insurance.

Given that claims repudiation arise out of early claims and from big-ticket policies, a further segregation of data into the age of claims and the types of policies would have helped. These numbers are also important when you consistently track them. “It’s unlikely that fraudulent claims will consistently be high for the insurer. Even if it’s early claims, it reflects on the underwriting standards of the insurer. As the industry matures, the claims settlement should improve too,” said Mehta.

What should you do?

There is good news ahead. The Insurance Laws (Amendment) Ordinance, 2014 will push insurers towards better underwriting standards. According to the new rules, insurers can’t reject a claim on any grounds after three years. So, since the rules prohibit them from rejecting non-early claims, the industry is likely to improve standards. “When one cannot underwrite at the time of claim, the only option left is to underwrite at the time of proposal. Insurers will more and more take to underwriting risks at the time of proposal so that they are able to create a good portfolio, which keeps claims under control. We foresee a definite change in new business processes, where proposals would be strictly underwritten to ensure that risks are avoided upfront. As a result of this, we will see lower repudiations and higher claim settlements,” said Chaudhry.

The rules will encourage better hygiene, but you need to do your bit too. Fill the proposal form at the time of buying an insurance policy with honesty and diligence. Don’t pass this important exercise to your agent and sign on all the pages without so much as a cursory glance. Spend time in understanding your policy and giving complete details to the insurer because, regardless of the claims performance or the time period, any insurer will find it very difficult to deny a genuine claim.

Claim
Claim - means a demand made by You or on Your behalf for payment of Medical Expenses or any other expenses or benefits, as covered under the Policy
Policy
"Policy" means this document of Policy describing the terms and conditions of this contract of insurance, including the company's covering letter to the insured if any, the Schedule attached to and forming part of this Policy, the Insured's Proposer form and any applicable endorsement thereon. The Policy contains details of the scope and extent of cover available to the Insured/Insured Person, the exclusions from the scope of cover and the terms and conditions of the issue of the Policy.