Disclaimer: Views expressed in the article are solely of the author.

People having health insurance policies are often confronted with a maze of insurance jargon and the insurer’s cumbersome requirements while filing a claim for a treatment undergone by the insured. During the claim processing period, various parties are at work to examine, approve and initiate the sum claimed. Those parties are the insurer, Third-Party Administrators (TPAs), and the network provider hospitals. There are times when the claims processing takes longer than expected. It is often due to the insurer waiting for the nod from the TPA to approve the claim, thereby causing a delay in claim settlement. In such cases, the insured has to face the brunt.

There have been cases where the patient was not relieved from the hospital even after getting discharged by the doctor, as the TPA hadn’t approved the claim to the insurer and the same was not paid to the hospital. I have experienced a similar scenario where a friend of mine had undergone treatment for a fracture in his leg and was assured to be discharged within a particular period of time, but he had to stay at the hospital unnecessarily for one extra day even after getting discharged by the doctor. This inconvenience was caused due to the insurer not getting the nod from the TPA and thereby not being able to clear the hospital’s bill. This problem would have not occurred if the parties engaged in processing the claim had all the data concerning the policy in one place. The problem can be addressed and avoided by using Blockchain technology.

Blockchain is a shared, replicated ledger where the information each participant sees is identical. Currently, the transaction between parties is done from point to point, transferring data over the internet, phone calls, or by post which is inefficient, expensive, and vulnerable to attacks. With the integration of blockchain in the process, sharing of information is done more efficiently, with less cost and greater security. Blockchain allows only authorized participants to have access to the shared ledger, making it more confidential and secure. The parties involved in the health insurance policy such as the insurer, insured, TPA, and the network provider hospital could be engaged in the blockchain network and be granted permission to access the same set of policy data. The regulator may also be granted access to the shared information ledger providing it with varied sets of data from different policies. The data so collected can be on various parameters such as claim settlement patterns, the insured’s claim filing behavior, and various others.  The regulator can put it to use by applying various Big Data tools and bringing about gainful analyses. The regulator may frame or modify regulations based on the analyses hence generated. 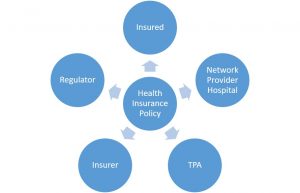