What would you call a product that is sold for 15 years but discontinued after just five? What would you call an industry that is unable to keep customers holding on to a product that was sold for the long term but is stopped midway? In India, we’d call this the life insurance industry, which is displaying signs of huge churn—losing customers on one hand, and trapping new ones on the other. A look at a single metric, which the insurance regulator releases, clearly points to large-scale malpractice in the industry. Here’s a closer look.
Life insurance is a long-term contract and the costs are built keeping this in mind. Costs of a 15- or 20-year product are front loaded on the assumption that the policyholder will stay the course for the full term of the policy. However, the latest persistency numbers released by the insurance regulator point out that the industry on an average is unable to retain even a third of its customers at the end of five years of a policy.
How long customers stay with their policies is determined by the persistency ratio, which indicates the number of policies that continue to generate renewal premiums that are due to be paid. The global level for 61st month persistency is around 65%. “Almost the entire industry has lower than 50% persistency in the 61st month. This means that half the policyholders left within five years. Internationally, this is over 65% on an average,” said Kapil Mehta, executive director, SecureNow Insurance Broker Pvt. Ltd.
Even the 13th month persistency ratio doesn’t look promising. According to the latest handbook of statistics published by Insurance Regulatory and Development Authority of India (Irdai) for financial year (FY) 2014, persistency ratios for the 13th month fell for 13 of the 24 life insurance companies. “This is a concern because the 13th-month lapses are particularly costly for buyers, and this should have been on an upward trend by now,” said Mehta.
Poor persistency is primarily the result of policyholders surrendering or lapsing their policies midway. This behaviour is largely caused by poor sales practices followed by the insurance industry. “Poor persistency is mainly on account of lapses. A lapse occurs at the point of sale when a policy is mis-sold or bought with poor understanding,” said Vighnesh Shahane, chief executive officer and whole-time director, IDBI Federal Life Insurance Co. Ltd.
Before we discuss why life insurers in India are unable to retain policyholders, and what poor persistency means for you, let’s start with understanding how this ratio is calculated.
Persistency calculation
Persistency ratio shows the leakages in year-on-year renewals of life insurance policies and can be calculated both in terms of the amount of premium and the number of policies. Irdai, in its handbook of statistics, has looked at this ratio based on the number of policies because it believes that if persistency is calculated based on premium, the number gets skewed if one policy with a large premium gets lapsed. Leakages on account of death or maturity are not factored in, so this ratio primarily indicates leakages on account of lapse or surrender.
Insurers calculate the persistency ratio in two ways. The first method is to calculate persistency on a cumulative balance basis. This method calculates the leakages of the policy from the base year or the year in which the policies were sold. So, if the insurer sold 100 policies and 70 of these were renewed after a year or in the 13th month, the 13th month persistency will be 70%. After the second year, or in the 25th month, if 60 policies were renewed, the 25th month persistency will be 60%. If renewal after three years or in the 37th month is only for 50 policies, the 37th month persistency ratio will be 50%.
The numbers reported in the Irdai handbook are for different cohorts of policies. For instance, the 13th month persistency is of policies sold a year ago whereas the 61st month persistency ratio is of policies sold five years back. 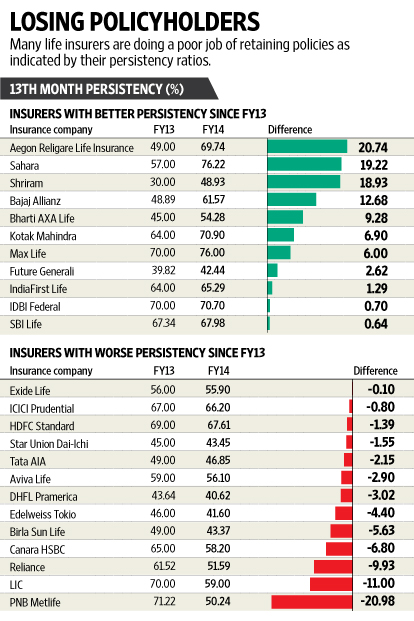 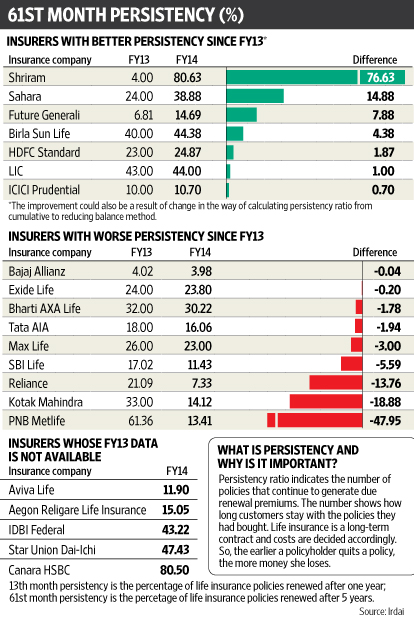