Published in Mint on 3rd December,2014, Written by Kapil Mehta
Last week, a columnist for this paper wrote about “One tight slap”. Her contention was that no provocation could justify slapping a child. I couldn’t help chuckle when I read the phrase. While most of us are peace loving folks, there are situations when we feel piqued. Children recognize these situations from the threat of a “one tight slap”. So how does this relate to insurance?
The insurance regulator exercises authority over the industry in several ways—framing regulations, mandating disclosures, granting approvals, issuing warnings and levying penalties on insurers. Penalties are the equivalent of “one tight slap” and unambiguously show what matters most.
Over the past 23 months, since January 2013, the insurance regulator has publicly issued 44 penalties, on average two per month. This does not include scores of warnings and intermediary licence cancellations. The total value of these penalties is about Rs.8.5 crore. About half, coincidentally Rs.420 lakh, is for excess payment to intermediaries such as corporate agents and brokers; Rs.105 lakh is for claims not fairly paid, Rs.90 lakh for not meeting regulatory sales targets, and Rs.66 lakh for selling products inconsistent with approvals. A complete breakdown is shown in the table. 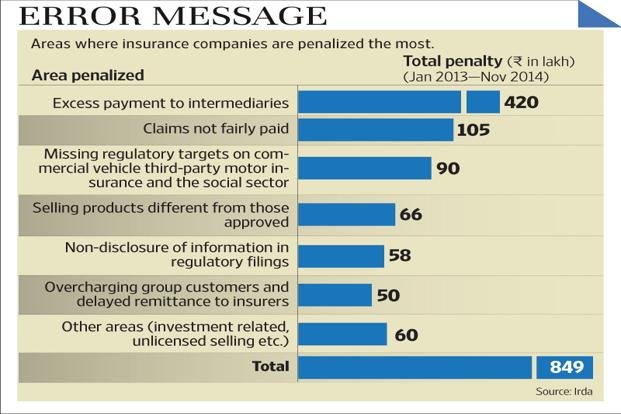 The big question is what these penalties mean for a consumer.
Take, for instance, the area that received the most penalties: excess payment to intermediaries. Why would an insurance company want to overpay and risk regulatory ire? Because quality insurance intermediaries are in short supply. Most intermediaries operate on a small scale and lack infrastructure to build a large business. The few that do are valuable.
How does this overpayment affect you, the insurance consumer? Particularly in life insurance, it results in a hard sell with little servicing because commission is highest in the first year and then reduces substantially.
You can deal with this by not getting hustled into buying insurance. Ask three questions, particularly before buying life insurance: What will my family get if I die? What returns am I likely to earn if I live? And, what will I get back if I surrender my insurance prematurely? This, however, is easier said than done. I meet so many businesspersons and executives who are successful and intelligent but have horrible insurance portfolios.
The economics of commission work differently in general and health insurance, where payments are evenly spread over each year. Therefore, for intermediaries, renewing health insurance is more valuable than acquiring a new client.
For the industry and the regulator, the challenge is to increase quality of distribution. How? By encouraging more capital, domestic and foreign; creating legal entities such as independent financial agents that allow best performing agents to deal with multiple insurers; and simplifying the licensing process.
The second largest penalty area is claims. Recently, at a radio show, several listeners asked me how to get their claims paid. An exasperated radio jockey said the battle between an individual and insurer was like David versus Goliath. Well, the fact is, David won.
Our instinctive reaction when a claim is denied is to roll up our sleeves and attack the insurer. Insurers hit right back. The claims case has to be presented sensibly. Often, it’s the customers who are at fault. How can the insurance company pay if you don’t submit a discharge summary? Or, the original bills? Or hide facts? If you have a genuine issue, then persistently follow through. Escalate the matter within the insurer, appeal to the ombudsman or inform the insurance regulator. The matter will be addressed.
A friend bought health insurance but did not disclose a prior surgery. When this came to light, a subsequent claim was denied on grounds of non-disclosure. My friend made a compelling case that the second claim was unrelated to the previous surgery and got paid.
There is a big opportunity for the industry to step up its claim handling. The industry bodies should set up a neutral, professionally run grievance handling cell rather than depend upon the ombudsman or regulator.
There is another penalized area that I would like to highlight—overcharging of customers. You should not pay a rupee more than the premium mentioned in the insurance policy. I’ve recently faced a situation where a doctor was charged Rs.20,000 for a professional indemnity that cost Rs.5,000. This got refunded fast when I pointed out the legal violations.
Finally, a comment on the penalty amount and time taken to levy a penalty. Today, the law limits the maximum penalty that the regulator can levy. Consequently, the benefit of breaking the law can far exceed the financial penalty. This will change when the new Insurance Bill is approved, and penalties will only increase. In terms of time, on an average, it took a year and four months to fine an insurer. This is partly because a certain process must be followed by the regulator. However, sometimes, the penalty and the fined incident are so far apart that the penalty’s effectiveness is diluted. This time should be shortened.
Penalties are a valuable signal that insurers and consumers alike should pay heed to.